How to assemble MC4 connectors and MC4 wiring cables 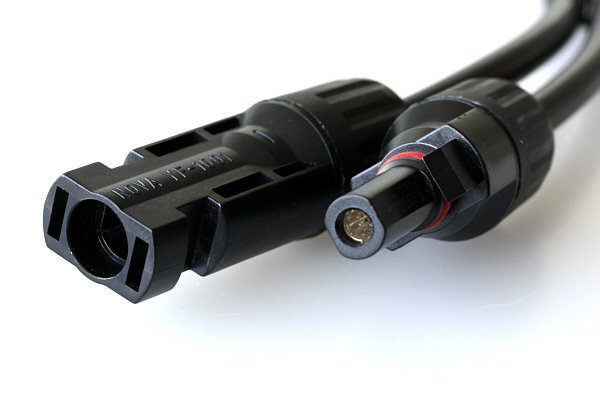 What is an MC4 connector (male connector & female connector) and an MC4 extension cable (8ft, 15ft, 30ft, 50ft, 100ft)? If you’re asking this question, you’ve probably noticed that most modern high power solar modules are manufactured with wire leads that have MC4 connectors on the ends. Years ago, solar modules were built with a junction box on the back that required the installer to manually attach wires to the positive and negative terminal posts. This method is still used, but it’s slowly becoming a thing of the past. Modern solar modules tend to use the MC4 connectors because they make wiring your solar array much simpler and faster. The connectors come in both male and female types which are designed to snap together.  Due to the locking mechanism of the MC4 connectors, they will not come unplugged and are well suited for outdoor environments. The connectors can be separated but it requires a special MC4 unlocking tool.

(How To Make/Crimp MC4 Connectors)

Please click, and you will find out MC4 Connectors products.

If you have two or more solar modules to wire in series, the MC4 connectors make it very simple. Take a look at the first module and you’ll notice that it has two wires extending from the junction box. One wire is the DC positive (+) and the other is the DC negative (-). Generally, the female MC4 connector is associated with the positive lead and the male connector is associated with the negative lead. This may not always be the case, so it’s always a good idea to look at the markings on the junction box or test the polarity with a digital voltmeter. A series connection is when you wire the modules together by connecting the positive lead on one module to the negative lead on another module. The male connector will snap directly into the female connector. Here’s a simple diagram illustrating this.

As you can see, the two modules are now connected together by the two leads. This increases the voltage of the circuit. For example, if your modules are rated for 18 volts at maximum power (Vmp), then two of them connected in series will measure 36 Vmp. If you connected three modules in series, the total Vmp would be 54 volts. The current at max power (Imp) will be constant when wiring a series circuit.

Parallel wiring requires the positive leads to be connected together and the negative leads to be connected together. This method will increase the current at max power (Imp) while keeping the voltage constant. For example, let’s say your modules are rated for 8 amps Imp, and 18 volts Vmp. If you connect two of them in parallel, your total amps would be 16 amps Imp and the voltage would remain at 18 volts Vmp. When wiring two or more modules in parallel, you will need some additional equipment. If you’re only using two modules, the easiest method is to use MC4 multibranch connectors. You obviously can’t connect two male connectors or two female connectors together, so we use the multibranch connectors to accomplish that. There are two different multibranch connectors. One type accepts two male MC4 connectors on the input side and has a male MC4 connector for its output. The other type accepts two female MC4 connectors and has a female MC4 connector for its output. Essentially, you’ve stepped down the number of wires from two positive and two negatives to one positive and one negative. Here’s a diagram so that you can see what it’s doing. What is an MC4 Wiring Cable and How can you use them?

Don’t feel bad if you’re confused by the MC4 extension cables. If you’ve never worked with solar modules before, they can be a little intimidating. First of all, they’re expensive. Nobody wants to purchase an expensive cable and later find out the length is too short after it’s been cut. Cut cables cannot be returned, so we want to be sure you fully understand how to choose the appropriate length and how to use them to connect your panels together. An MC4 extension cable is very similar in concept to an electrical extension cord. Just like an extension cord has a male plug on one end and a female plug on the other, an MC4 extension cable has a male connector on one end and a female connector on the opposite end. They are available in many different lengths from 8 feet to 100 feet long. Let’s go back to our first example of wiring two modules in series. Once you’ve got the two modules connected in series, you need to use MC4 cables to bring that power to wherever your electrical equipment is located (usually a circuit breaker and a solar charge controller). Systems using two modules are generally used for RV’s and boats, so you can usually use the extension cables along the entire distance. When you use solar panels on a house or cabin, the distance that the wire must travel is normally so long that using an extension cable is no longer practical. In those situations, the extension cables are used to connect the panels to a combiner box. That way you can use less expensive wiring inside the electrical conduit to cover greater distances at substantially less cost than the MC4 cables. Let’s say that the total length of wire needed to go from the two modules to your electrical equipment is 20 feet. Note: This is where most people start getting confused. You only need one extender cable. We offer an extender cable in a 50-foot length, which is best suited for this situation. Remember that the two solar modules that you’ve already connected together have one positive lead with a male MC4 connector and one female lead with a female MC4 connector. To travel the 20-foot distance to your equipment, you will need a 20-foot wire with a male connector and a 20-foot wire with a female connector. This is achieved by cutting the 50-foot extension cable in half. That will give you a 25-foot wire with a male connector and a 25-foot wire with a female connector. That allows you to plug into both leads of your solar panel and it gives you plenty of wire to get to your destination. Sometimes cutting the cable in half is not always the best solution. Depending upon the location of the combiner box, there may be a greater distance from one side of the panel string to the combiner box than from the opposite side of the panel string. In this case, you will want to cut the extender cable at a spot that allows both cut ends to reach the combiner box with a little slack to work with. This diagram shows you an example of that scenario:

For systems using a combiner box, you simply choose a length that, when cut, is long enough to be terminated into the box. You can then strip back the insulation from the cut ends and terminate them to a bus bar or circuit breakers.

This is an MC4 disconnect tool. If for some reason you need to disconnect your MC4 cables, you will need one of these. You must insert the two extended posts on the end of the tool into the side of the female MC4 connector. This disengages the locking mechanism on the male connector and allows the two connectors to separate. The disconnect tool is sold as a set of two. Two tools are required if you ever need to disassemble the connectors. This is almost never necessary. Generally, one tool is all you will need.